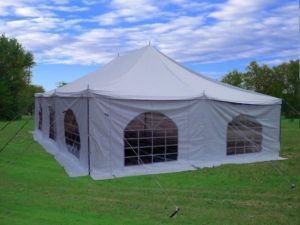 A crew of six workers was sent to set up a tent for a wedding. All were 25 years old or younger and were seasonal employees. As one of the tent poles was being put into place, it contacted an overhead electrical service line, which sent electric current traveling down the pole to the wet ground. Five of the workers were injured by the initial shock; a secondary shock further injured some of the workers who were lying on the ground. One of the workers died from electrocution. The others suffered burns and dislocations. An MOL investigation found that none of the workers had received any safety training. And no one from the tent company assessed the area in advance or asked for information about utilities. The company pleaded guilty to failing, as a constructor, to ensure that the health and safety of workers was protected and to provide adequate information, instruction and supervision on the hazards of overhead electrical wires. The court fined it $100,000 [Signature Events Rental Shoppe, Govt. News Release, Feb. 3, 2015].