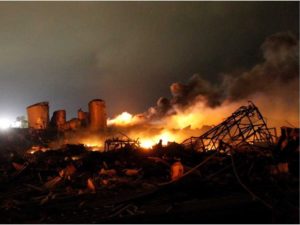 Many people feel that too few company executives are held responsible for serious workplace safety incidents and would like to see more CEOs, directors, owners and the like fined or even jailed for such incidents. But what about having them executed?

On Aug. 12, 2015, a series of explosions at a warehouse in the port city of Tianjin, China killed at least 165 people—including first responders, such as firefighters and police officers—and damaged more than 300 buildings. The destruction caused losses of more than $1 billion.

Judges in China recently jailed 49 people on charges tied to this deadly incident, which was one of China’s worst industrial tragedies. The people sentenced include 25 government officials and 24 staff members of the companies involved.

The most serious sentence was handed to Yu Xuewei, chairman of the warehouse company Ruihai Logistics, who was sentenced to death for bribing port administration officials to obtain a certificate to handle hazardous chemicals at the port. Yu said in court that he “regretted his actions and wouldn’t appeal.”

It’s unlikely, however, that Xuewei will actually be executed, as such sentences are usually commuted to life in prison after two years.

Others sentenced included staff from Ruihai Logistics and another company that provided Ruihai with “counterfeit safety evaluations.” The government officials were sentenced to prison for “dereliction of duty, abuse of power, and accepting bribes.”

The massive explosions were caused when stocks of nitrocellulose, a flammable compound, became too dry and caught fire in the August heat. The flames then spread to illegal stores of the combustible fertilizer ammonium nitrate, triggering a series of blasts.