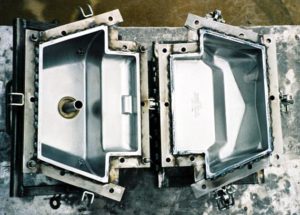 A worker performing maintenance on a metal mould at a manufacturing plant raised the mould’s lid, which was held open by a metal hook attached to an overhead hoist. While he was working under the elevated lid, the hook broke in half, causing the lid to strike him on the head and crushing him between the lid and the lower section of the mould. He died from his injuries. An MOL investigation found that no blocking devices had been used to prevent the elevated lid from closing while the worker was under it. The manufacturer pleaded guilty to failing to ensure that machinery, equipment or material that’s temporarily elevated and under which a worker may pass or work was securely and solidly blocked to prevent it from falling or moving and was fined $155,000 [Johnson Controls Automotive Canada LP, Govt. News Release, May 20, 2014].