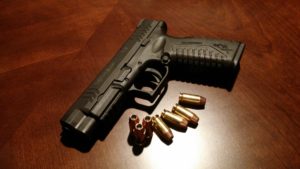 A hog fuel operator was suspended after police raided his home and seized a cache of 27 firearms, including a sub-machine gun, three semi-automatic rifles, two shotguns, a stun gun, a rifle and three pistols. The operator was ultimately charged with possession of 4 unlicensed firearms. And the detective agency the company hired to investigate reported that the operator had no criminal record and his limited social media activity was relatively innocuous. So, when the company suspended him again, the union cried foul. The Ontario arbitrator reinstated the operator pending resolution of the criminal charges. The suspension could be restored if the operator were to be convicted. In the meantime, he was entitled to the presumption of innocence. Based on the detective report, it didn’t look like he was the type to “go postal.” And if he did, having the extra 4 unlicensed guns wouldn’t do much to add to the mayhem given the enormous supply of firearms he already possessed legally [Domtar Inc. v Unifor, Espanola Local 74, 2021 CanLII 42452 (ON LA), May 12, 2021].