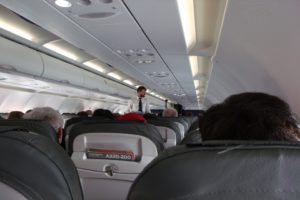 Transport Canada agreed to reduce flight attendant staffing requirements provided that the airline seeking the exemption could demonstrate that the reduced crew could carry out the necessary evacuation within 15 seconds. After 3 failed simulation attempts, the crew pulled it off—but only after the airline had shaved time by making a previously mandatory step voluntary. The union objected, claiming that the change in procedure threatened the safety of the crew and passengers. The appeals court agreed and ordered the airline to scrap the change and Transport Canada to pay the union’s $3K legal bill [Canada (Transport) v. Canadian Union of Public Employees, 2017 FCA 164 (CanLII), Aug. 4, 2017].