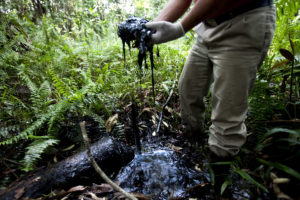 Companies that are responsible for contaminating the environment in Canada can be held liable under Canadian environmental law. And if a Canadian company contaminates the environment in another country, it may be liable under that country’s environmental law. But what if an international company is successfully sued under one country’s environmental law and the winning parties seek to collect the damages from that company’s Canadian subsidiary through the Canadian courts? In a case involving a judgment against Chevron by a court in Ecuador regarding environmental damage to the Amazon, an Ontario court recently dismissed a lawsuit that attempted to collect that judgment from Chevron’s Canadian subsidiary. Here’s a look at the reasoning for its decision.

What Happened: People in Ecuador sued Texaco for polluting a region of the Amazon. Chevron, a US corporation, bought Texaco in 2001. In 2011, the plaintiffs won and an Ecuadoran court ordered Chevron to pay them approximately $9.51 billion (USD) in damages. When Chevron refused to pay, the plaintiffs sued it and Chevron Canada in an Ontario court for recognition and enforcement of the Ecuadorian judgment. The Supreme Court of Canada ruled that the Ontario courts had jurisdiction to enforce the Ecuadoran judgment. Chevron Canada and Chevron then asked the Ontario court to dismiss the lawsuit.

What the Court Decided: The Ontario Superior Court of Justice dismissed the lawsuit.

The lesson from the various Canadian decisions in the Chevron case is that although Canadian courts may have jurisdiction to enforce foreign judgments in Canada relating to environmental harm, those courts may nonetheless decline to enforce such judgments. The problem for the plaintiffs in this case is that they’re trying to enforce a judgment imposed on Chevron against a Canadian subsidiary that didn’t commit any wrongdoing, didn’t operate at all in Ecuador and had limited, indirect ties to the parent company. The Ontario court ultimately rejected the plaintiffs’ argument that declaring that the shares and assets of Chevron Canada are unavailable to satisfy the legitimate judgment debt of Chevron “would be an injustice to the 30,000 indigenous people whose way of life has been ruined by Chevron’s polluting activities.”

Want access to all the Canadian safety and environmental compliance resources that the OHS Insider has to offer, including updates on important court cases such as this one, and much more? Sign up for a free trial membership now! [/box]