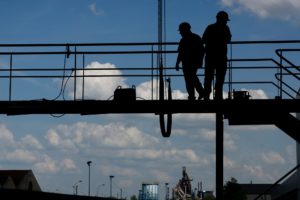 A 120-foot long temporary modular bridge being lowered into place from both ends at the same time by a pair of pump jacks collapsed on top of a worker who was sitting on the concrete landing pad below. Had the contractor followed manufacturer’s instructions, the would have been well clear of the landing pad since he wasn’t involved in the moving or jacking operation. The contractor was fined $175,000 after pleading guilty of failing to ensure a safe procedure was used for jacking down a temporary bridge [R.M. Belanger Limited, Govt. Press Release, July 9, 2021].