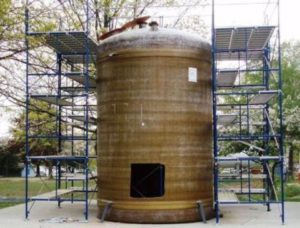 Confined spaces such as manholes, boilers, tunnels, wells, storage tanks, vats, silos and trenches, are some of the most dangerous hazards in a workplace. Such spaces may be hazardous when the atmosphere in them doesn’t contain enough oxygen for workers to breathe or contain high levels of toxic gases that may poison workers. As a result, the OHS regulations across Canada contain requirements for the ventilation of confined spaces to prevent or address hazardous atmospheres. (See this chart for those requirements.) Taking these five steps will help you comply with those requirements.

The OHS regulations usually define “confined space.” Although there are some slight variations among jurisdictions, these definitions are very similar. In this article, when we speak of a “confined space,” we mean an area that has these four characteristics:

1) Is enclosed or partially enclosed;

2) Isn’t designed or intended for continuous human occupancy but is large enough for a worker to enter to perform work;

3) Has restricted or limited means of entrance and exit; and

4) Is or may become hazardous to anyone entering it because of its design, construction, location, atmosphere, materials or substances in it, work done in it or other conditions.

Atmospheric testing of confined spaces should usually be conducted by “competent” workers. It should also be done using appropriate testing equipment that has been properly calibrated and in accordance with the manufacturer’s specifications.

Insider Says: Although you must test or measure a confined space’s atmosphere before workers enter it, you should continue monitoring the atmosphere while workers are inside the confined space to ensure that it doesn’t become hazardous.

If testing determines that the confined space has a hazardous atmosphere or is at risk of developing one, you should ventilate the space to eliminate the hazard. There are two basic types of ventilation:

Step #3: Designate a Worker to Monitor the Ventilation Equipment

If mechanical ventilation equipment doesn’t have an alarm or warning system, you should ensure that it’s constantly monitored by a worker who’s in communication with the workers in the confined space. This duty will typically fall to the confined space attendant (also called a standby person/worker or sentinel). This individual is assigned to stay outside of the space and monitor the work inside to ensure the safety of the workers in the space. Workers assigned to this position must be “competent” and get appropriate training.

In the event that your mechanical ventilation equipment fails, you must have contingencies in place to protect workers. For example, you should have a procedure to allow workers in the confined space to escape from the space safely and before the atmosphere inside it becomes hazardous. This exit or escape procedure should be in writing. In addition, you should have appropriate respiratory protection available for workers’ use in an emergency.

If ventilation equipment fails without warning, workers are unable to exit the confined space safely or another emergency occurs in the space, ensure that proper rescue procedures are followed. Confined space fatalities often include would-be rescuers who rush into such a space to save co-workers without proper rescue equipment, PPE or training.

All workers who work in confined spaces must get training specific to the hazards, safety measures and other requirements for such work. For example, all such workers must get training on the exit procedures to be used in the event of a mechanical ventilation system failure. In addition, confined space attendants should get special training that covers, among other things, the set-up, use and limitations of the ventilation equipment.

Each year, workers die in confined space incidents. Although some of these fatalities are due to the collapse of excavation walls or other causes, it’s likely that many of them could be prevented through proper ventilation. For example, in Sept. 2008, four workers at a BC mushroom farm all died within minutes of entering a pump shed where toxic gas had accumulated. Two other workers survived but suffered permanent, severe brain damage. So if your operations involve work in confined spaces, it’s crucial that you comply with the ventilation requirements.

The OHS regulations often require an employer to ventilate and/or purge a confined space with a hazardous atmosphere. But what’s the difference between ventilating and purging? Ventilating involves introducing fresh, clean air into the confined space, often while exhausting air from the space (such as any fumes produced by equipment used in the space). Purging is the introduction of a safe gas or steam to flush out or displace the contaminants that make the atmosphere hazardous. Depending on the hazard, you may use either or both techniques to render the atmosphere safe for workers. For example, you may purge the confined space to remove a toxic gas and then ventilate it to maintain a safe atmosphere.