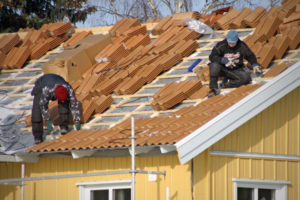 Exceeding industry standards does not, on its own, protect employers from health and safety convictions or fines, a recent court decision shows.

A roofing company was charged with two offences under the Ontario Occupational Health and Safety Act. The charges alleged a failure to ensure that roofing workers were adequately protected by a guardrail system that met the requirements of the Construction Projects regulation under the OHSA.  A worker fell off a roof after he had removed both the middle and upper parts of a guardrail system to dump garbage, without tying-off. His sleeve caught on a motorized buggy he was using to transport waste on the roof; both he and the buggy went over the edge.

The court found that the guardrail system was routinely opened up by removing the middle rail and possibly also the top rail.  The original wooden middle rail had been replaced with an iron bar that was not securely fastened, at the time of the accident, to the guardrail system.  The presence of the removable iron bar violated the regulation.  Also, there was no clear process in place for the garbage disposal at the time of the accident.

The court noted that the company had “generally met or exceeded many industry standards in its operations”, and had clear internal policies, weekly production meetings to discuss safety topics, and “Toolbox Talks.”  It also hired outside consultants to teach various health and safety courses and to perform spot audits of safety.  There was evidence that workers who failed to use safety equipment were sent home without pay and given retraining.  The company had even fired long-term employees who repeatedly violated safety rules.

However, none of that was enough to establish the “due diligence” defence, because the company had not taken “all reasonable steps to prevent this accident.”

This case shows that an excellent safety program may not be enough to defeat OHSA charges if the employer failed to properly address even one particular hazard.

(This piece was originally posted on the Canadian Occupational Health & Safety Law blog.)

For more on this topic, read “Is Following an Industry Standard the Same Thing as Due Diligence?”