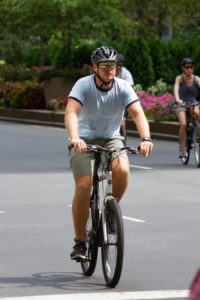 A bicyclist was killed after being struck by an overhanging truss, which had been loaded onto the trailer of a delivery truck. The truck was on its way to a worksite at the time. The truss company was charged with violating the OHS laws by failing to protect people not in its employ. A supervisor was also charged with permitting a worker to operate equipment that could create a hazard [Eastern Roof and Floor Truss Manufacturing (2008) Inc., Govt. News Release, Aug. 27, 2013].