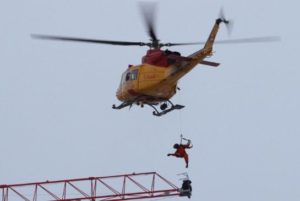 A residential construction project caught fire. To evade the flames and heat, a crane operator was forced to flee the cab and crawl out on the 65-metre-long boom, which was about 100 metres in the air. A military helicopter had to rescue the operator, who suffered burns. During the MOL investigation, inspectors couldn’t get records from the company owner or schedule an interview with him. Because of the owner’s lack of response, the MOL wasn’t able to continue its investigation. At trial, the court convicted the owner of knowingly furnishing an inspector with false information or neglecting or refusing to furnish information required by an inspector, and failing to furnish all necessary means in the person’s power to facilitate any entry, search, inspection, investigation, examination, testing or inquiry by an inspector. He was fined $19,000. The company was found guilty of failing to comply with an inspector’s requirement and fined $8,000 [A & A Crane Inc. and Aram Malek, Govt. News Release, May 1, 2015].