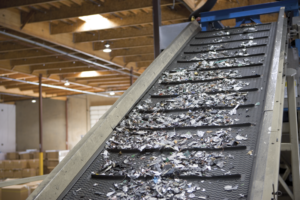 Workers were repairing a conveyor that was part of a document shredding operation when material got stuck in the return side of the conveyor in a pit. A worker opened a gate and climbed down a ladder into the pit, reaching into an opening to remove the material. His arm got caught in the conveyor, resulting in the loss of the arm at the shoulder. The MOL’s investigation found that there was no mechanism to prevent a worker from opening the gate to access the area while the conveyor was in operation and no device in place to prevent access to the pinchpoint created by the moving underside of the conveyor. The company pleaded guilty to a guarding violation and was fined $90,000 [Iron Mountain Canada Operations ULC, Govt. News Release, Jan. 17, 2014].