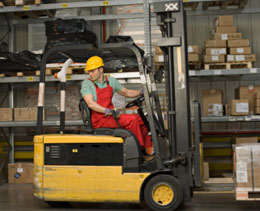 The driver of a truck carrying bundled steel frames arrived at a construction site. The crane that was normally used to unload the frames wasn’t available, so a worker got a forklift. The driver walked around the truck, removing the chains that secured the load. While he was out of sight, the worker tried to lift the first bundle with the forklift. But the bundle slid off the forks and fell to the other side of the truck, where it landed on the driver, killing him. The company pleaded guilty to failing to ensure that material was moved in a manner that didn’t endanger a worker and was fined $85,000 [Island Steel Erectors Ltd., Govt. News Release, Feb. 6, 2013].