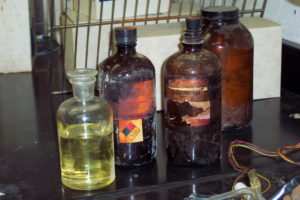 Two workers were washing trucks and trailers at a beer store distribution centre. One of them found a liquor bottle filled with methanol windshield washer fluid. But the bottle still had the liquor label on it. Both workers drank from the bottle; one took the bottle home and finished it. He later died from methanol poisoning. The company pleaded guilty to failing to acquaint a worker with a hazard in the handling, storage or use of a liquid chemical agent. The court fined it $175,000 [Brewers Retail Inc., Govt. News Release, Feb. 15, 2013].