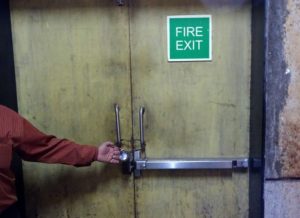 After vandalism and other issues to the emergency exit doors of a ballroom, a hotel chained and locked the doors so they couldn’t be opened from either side. A group rented the ballroom, saw the chained doors and complained to the fire department. The firemen told hotel staff to remove the chain and lock, which they did. The hotel pleaded guilty to violating the fire code by failing to keep a means of egress free of obstructions. At sentencing, both the hotel and government asked for a $3,000 fine to be imposed. But the court said the hotel knew the emergency exit doors weren’t in good repair. Rather than incurring the expense of repairing the doors, which ultimately cost about $5,000, it chose the less expensive course of buying a lock and chain and obstructing the exit. The court concluded that the public would be concerned if a company that failed to maintain a fire exit in good repair got a fine less than the cost of repairing the doors and so it imposed a $9,750 fine (about twice the cost of repairs) [R. v. Sobha Investments Ltd., [2017] ABPC 55 (CanLII), March 21, 2017].