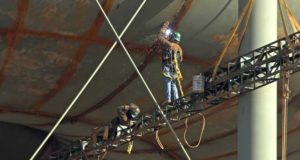 Most provinces mandate use of fall protection for workers at risk of falling 3 or more metres. But while the OHS laws list the basic types of fall protection required, they also give employers some leeway in deciding whether the required measure is appropriate for the specific conditions. A recent case from Nova Scotia is an excellent illustration of just how far employers can go in exercising this discretion.

The Law
Nova Scotia OHS fall protection regulations say that workers exposed to the risk of falling 3 metres or more must be provided fall protection providing “a level of safety equal to or greater than a fall arrest system.”

What the Board Decided:  The Nova Scotia Labour Relations Board rejected the contractor’s defence and upheld the violation.

What Happened: An OHS officer cited a roofing contractor for violating the rule after seeing his crew working on a top of house without fall protection. The contractor, a 30-year roofing industry veteran, acknowledged that the crew was over the 3-metre limit but insisted that jack and planks were actually safer than fall arrest in this situation. The roof was confined and the crew was big, he explained. So the ropes of the fall arrest system would have heightened the danger by creating a tripping hazard.

A professional and experienced roofer like me should be allowed to decide the safest system of fall protection without being hamstrung by regulations that don’t take the particular circumstances into account, the contractor had argued. The irony of the case is that the roofer actually did have that discretion. He just didn’t know the legal ins-and-outs of using it right.

Explanation: The key question was whether under these circumstances, jacks and planks provided a “level of safety equal to or greater than a fall arrest system.” If so, the contractor’s decision to use that method instead of fall arrest wouldn’t have been an OHS violation.

The problem is that it wasn’t enough for the contractor to insist that his method was just as safe: He had to prove it on a balance of probabilities. General experience and expertise in roofing safety wasn’t enough to meet this burden. The contractor also had to offer up direct evidence like photographs of the roof illustrating that his methods were appropriate for the situation. He didn’t do that. As the Board noted, the only direct evidence about the suitability of the jacks and planks actually came from the OHS inspector who claimed that the planks were “bowed” and incapable of stopping a roofer from rolling off the roof. So the Board’s decision to side with the inspector and against the contractor was a no-brainer.