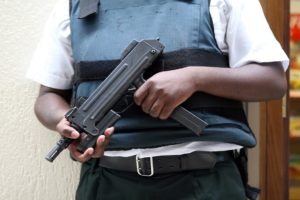 OHS laws require employers to take all “reasonable” precautions to ensure health and safety.  Such precautions include furnishing workers appropriate PPE. Most PPE is inherently passive and purely defensive in nature—hard hats, goggles, pads, etc. But if the hazard being guarded against is workplace violence, PPE may include   guns. Does the duty to take reasonable precautions against violence mean employers must arm their workers? Here’s how a new Nova Scotia Labour Board ruling handled that hot potato.

What Happened: After doing a workplace violence hazard assessment, an independent expert listed 51 things the Sheriffs Department could do to protect Sheriffs from violence. The Violence Prevention Plan the agency ultimately came up with incorporated most of the recommendations. But it declined the recommendation to  issue firearms to Deputy Sheriffs performing prisoner transport and other high risk duties. The union cried foul, claiming that rejecting the recommendation was a violation of the agency’s OHS duty to “take every precaution reasonable in the circumstances” to protect the Sheriffs.

What the Board Decided:  The Nova Scotia Labour Relations Board disagreed and tossed the union’s appeal.

How the Board Justified Its Decision:   First and foremost, the agency’s Violence Prevention Plan was reasonable, even without the firearms, the Board reasoned. The Plan included other measures adequately addressing the violence risks cited in the assessment, including:

The Board also noted the agency’s strong justifications for not wanting to arm its Sheriffs: