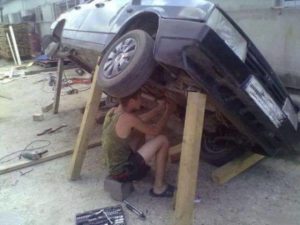 A young worker for an electrical company was with an apprentice at a car dealership trying to determine the source of an electrical short problem in a rooftop heating unit. They were attempting to run electrical wires through a conduit located at ceiling height by using a skyjack in the sprinter bay area. When the apprentice hit the button to open the sprinter bay door, the door opened, struck and knocked over the skyjack with the young worker on it. He suffered serious injuries. The car dealership was fined $65,000 for failing to acquaint the workers from the electrical company with the hazard of the overhead door opening when using a skyjack in the sprinter bay area. The electrical company had previously pleaded guilty and been fined $25,000 [M-B Oakville Autohaus, Govt. News Release, May 24, 2016].