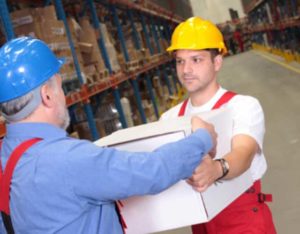 A factory worker has several mental illnesses that trigger violent and erratic behavior, requiring him to take medical leave. The factory work involves rapidly-moving production lines and a stressful environment that the worker’s treating physicians say can trigger his violent tendencies. They say the worker can return to work with accommodations for his disabilities, but there’s no guarantee he won’t get violent again. His illnesses aren’t curable but can be controlled by medication and abstinence from drugs and alcohol. Before returning from leave, the worker twice visits the factory, making threats to other workers and accompanied by a pit bull on one occasion. The employer has no reliable way to ensure that the worker’s taking his medicine and abstaining from drugs and alcohol. It claims it can’t accommodate him without undue hardship. So it fires the worker, paying him required severance and termination pay. The union files a grievance requesting the worker’s reinstatement.

Must the employer reinstate the worker?

A. Yes, because the termination was discriminatory as it was based on his disability.

B. Yes, because doctors said he was fit to return to work.

C. No, because the employer complied with the employment standards laws.

D. No, because the employer has a duty to protect other workers from the risk of violence.

D. Under the OHS laws, the employer has a duty to take reasonable steps to protect workers from threats of violence.

This hypothetical is based on an Ontario grievance in which a factory terminated a worker because of his post-traumatic stress and other personality disorders, which caused impulsive and violent behavior. It claimed that it couldn’t accommodate his disability without undue hardship. An arbitrator agreed with the employer. Although the worker was making progress in treatment, there was no medical evidence that he didn’t pose a high risk of danger to himself and/or to others. The employer had a duty under the OHS law to ensure that the workplace was safe for everyone, which means taking all reasonable steps to protect its workers from violence and threats of violence. Thus, the arbitrator concluded that the risk for potential violence warranted the worker’s termination.

Insider Says: For more information on workplace violence, register now for a webinar on Feb. 20, 2013 that can help you assess threats of violence in your workplace. And visit the OHS Insider’s Workplace Violence Compliance Centre for additional articles, tools and resources.

A is wrong because although the worker did have a bona fide disability, human rights laws don’t prohibit an employer from ever terminating a disabled employee. If an employer can’t accommodate a worker’s disability without suffering undue hardship, it may legally terminate him. In this case, given the worker’s current threats against co-workers, the doctors’ reports indicating that a risk of violence still existed and the fact that the stressful work was a trigger for his violent tendencies, the employer couldn’t accommodate the worker without unduly endangering the rest of the workforce. So it wasn’t discriminatory for the employer to fire him.

C is wrong because employers must comply with both employment standards and human rights laws when dealing with workers. Simply complying with the requirements for termination and severance pay under the employment standards laws won’t shield an employer from liability if it fired a worker on discriminatory grounds. For example, if the worker here was mentally disabled but not violent, the employer couldn’t fire him because it was uncomfortable having a disabled worker on staff and then argue the termination was legal because it paid him termination and severance benefits. It must also comply with human rights laws protecting disabled workers from termination.