Can Employer Fire Worker Stopped for Drunk Driving on the Way to Work? 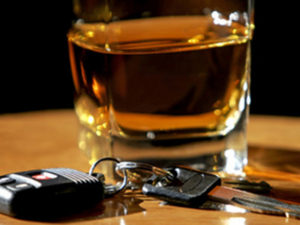 A shift supervisor driving to work for the night shift falls asleep at the wheel and drives into a ditch. The police arrive and give him a breathalyser test, which reads .045. So the officer immediately suspends his licence as his blood alcohol content exceeded .04. The supervisor doesn’t report to work that night or the next day. When he does show up, he admits he drank before driving to work but claims that he didn’t realize he was impaired until he saw the breathalyser results. The supervisor is responsible for nearly a dozen employees, operates heavy equipment and works near flammable and explosive materials. The employer’s drug and alcohol policy warns that discipline up to and including dismissal can result if an employee, particularly one in a safety-sensitive position like the supervisor, appears on the premises under the influence of alcohol or drugs. The supervisor has no disciplinary record but the employer terminates him anyway. He sues for wrongful dismissal.

Was the supervisor’s termination justified?

C. The supervisor’s safety-sensitive position justified his termination for violating the alcohol policy by drinking before reporting for his shift.

This hypothetical is based on a decision by Saskatchewan arbitrator involving a wrongful dismissal claim by a supervisor who was fired after being caught driving while impaired on his way to work. The supervisor’s job was considered a safety-sensitive position. The arbitrator explained that even if a worker has no prior disciplinary record, a serious safety violation can be grounds for termination. The arbitrator found that the supervisor’s drinking alcohol before leaving for his safety-sensitive job was a serious safety violation, jeopardizing the safety of his co-workers and the employer’s facility. Concluding that the supervisor recklessly or intentionally decided to consume alcohol before work, the arbitrator noted there was no rational explanation for his behaviour that would indicate he wouldn’t repeat the conduct. Because of the safety-sensitive nature of the workplace and the supervisor’s job, and his obligation to set an example for other workers, the arbitrator ruled that the employer was justified in terminating him.

A is wrong because a worker needn’t be drinking or found drunk in the workplace to justify disciplinary action. An employer can properly discipline a worker for conduct outside the workplace if such conduct impact the workplace, such as if a worker assaults a co-worker off-site. In this case, the supervisor admitted drinking immediately before leaving for work, demonstrating an intent to report for duty while under the influence of alcohol. Because this off-site conduct impacts the workplace, violates company policy—and could even violate some jurisdictions’ OHS laws—the employer was justified in disciplining the supervisor.

B is wrong because a worker can be fired even the first time he violates company rules. Whether termination for a first offence is appropriate depends on several factors, such as what the policy says about possible consequences for violations, the seriousness of the violation and whether the infraction was intentional or just negligent. In this case, the employer’s policy clearly warned that termination could result for violating the alcohol policy. And because coming to work drunk posed serious safety risks to both the supervisor and others in the workplace, his first offence justified his termination.

D is wrong because simply committing a crime doesn’t necessarily justify automatically firing a worker. Although convictions for serious crimes, such as homicide, will generally constitute just cause to fire a worker, non-violent crimes, such as theft, fall into a gray area. The rule of thumb is that the closer the relationship between the crime and the worker’s employment, the more likely it is to justify termination. So in this case, if the supervisor had been caught drunk driving while on vacation when he wasn’t scheduled to be working, his termination on that basis wouldn’t be justified.