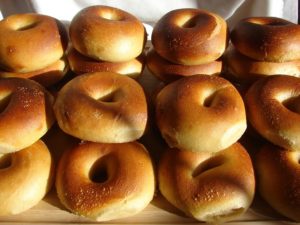 The bagel production line at an industrial bakery stopped; the conveyor system was left running. A worker reached into the conveyor from below to clean dough that had become stuck using a metal scraper. But the scraper broke and his arm was drawn into an unprotected pinchpoint between the conveyor belt and the bottom of the machine’s idler pulley. He suffered a broken arm and required surgery. The bakery pleaded guilty to failing to ensure that motion on a machine that may endanger the safety of a worker was stopped before a worker cleans the machine and fined $60,000 [Oakrun Farm Bakery Ltd., Govt. News Release, Dec. 5, 2013].