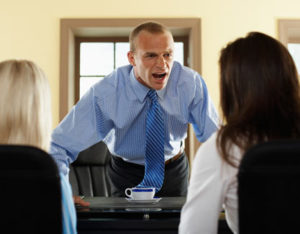 A 5’8” worker who didn’t have the use of his left arm went into the bathroom and was confronted by a 6’2”, 300 lb. co-worker, who told him “I am your worst nightmare” while standing over him in a threatening way. The worker reported the upsetting incident and the employer suspended the co-worker for three days. The union filed a grievance, arguing that the co-worker was just joking. But the arbitrator disagreed. The co-worker had previously been disciplined for making a threatening comment. She ruled that “I am your worst nightmare” meant “I am someone you should be afraid of” and is an example of “classic bullying.” The arbitrator found that the co-worker had perceived the worker’s anxiety and tried to intimidate him. In short, although the co-worker’s comment wasn’t a specific threat of physical harm, it did violate the employer’s workplace violence policy and was hostile language. Thus, the three-day suspension was appropriate discipline [Workers United Canada Council v. Winners Merchants International, [2015] CanLII 21612 (ON LA), April 9, 2015].