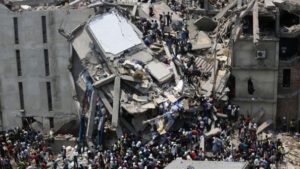 In just two incidents in Bangladesh in 2013, more than 1,200 workers were killed in garment factory collapses and fires and hundreds of others were injured. And these tragedies were hardly the only ones that year.

In response to these high-profile incidents, two groups of retailers were formed to conduct inspections of these factories and address unsafe conditions:

According to a recent article in the New York Times, although these groups have conducted the promised inspections, identified dangerous conditions and demanded the closure of factories to address the hazards, they’ve faced resistance from both factory owners and government officials at every turn.

Why? Because of the economic impact of even temporary closures on these manufacturing facilities.

The Accord has successfully forced the temporary closure of just eight garment factories after inspecting 775. The Alliance has inspected 601 factories and gotten only five of them fully or partly closed because of safety problems.

But in numerous cases when hazardous conditions were uncovered, the groups have confronted considerable resistance to closing a factory building altogether and to the idea that a building should be closed as soon as possible.

The Times reports that tensions have been growing between these groups and the Bangladeshi apparel industry, which gets support against factory closures from the Bangladeshi government.

In one case, the Accord found that a building housing several factories was structurally unsound and needed to be closed so the safety issues could be addressed. But Accord officials said the government refused to order a shutdown even though the panel agreed with the Accord’s findings.

The inspector general for Bangladesh’s Department of Inspection for Factories and Establishments said the Accord’s safety findings weren’t official or binding on him. But under agreements with the Accord, the government is supposed to order any factories closed when conditions have been deemed unsafe by engineers and confirmed by a review panel.

Of course, it doesn’t help that the very workers who will be protected by safer factories have sometimes protested closures out of fear of losing their jobs or not being paid during the closures. Given the track record of the factory owners, these fears are certainly justified.

It’s time for factory owners and government officials in Bangladesh to stop obstructing efforts to make this extremely dangerous industry safer. Their callous disregard for the lives and well-being of workers all in the name of the bottom line is simply unacceptable.