Aspirin May Protect Against Skin Cancer 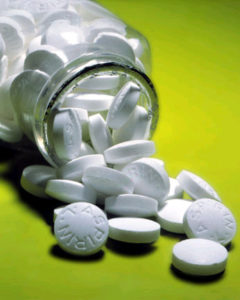 Skin cancer is far from rare, with an estimated 20% of North Americans expected to develop it at some point in their lives. And up to 2% of the population will develop melanoma, the most dangerous form of the disease.

If you have workers who spend a lot of time outdoors, hopefully they’re trying to cover their skin with clothing and are wearing hats, along with using a powerful sunscreen to protect any exposed skin.

But a new weapon in the arsenal against skin cancer may be sitting in many of your workers’ medicine cabinets. Aspirin, ibuprofen and naproxen may cut one’s risk for developing skin cancer by about 15%, according to new Danish research.

Researchers at University Hospital in Denmark looked at nearly 200,000 Danes, of whom 18,000 had been diagnosed with one of three types of skin cancer:

The researchers calculated how many people had been prescribed non-steroidal anti-inflammatory drugs, such as aspirin, ibuprofen and naproxen, for conditions such as heart problems or arthritis during an eight-year period.

The patients who were taking the highest doses of such drugs for the longest time were the least likely to have been diagnosed with skin cancer.

Before taking aspirin or other non-steroidal anti-inflammatory drugs on a regular basis, workers should first check with their doctor.