Which Hazardous Spills Must You Report to the Government? – Ask The Expert 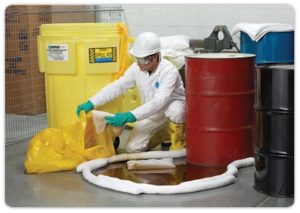 Which kinds of chemical spills do we have to report to the Ministry of Environment?

It depends on the kind of spill and jurisdiction you’re in.

Companies that discharge or spill products that have the potential to harm safety, health and/or the environment must immediately notify the MOE or other agency designated to receive such reports in their jurisdiction. Spill reporting requirements vary significantly from jurisdiction to jurisdiction. In addition, many municipalities also have their own reporting obligations. Typically, there are 2 layers of spill reporting:

The reporting duty is typically broad and may cover not only any person who released/spilled the substance but also caused or permitted it, as well as the person having possession, control or charge of the spilled substance.

If you’re not sure whether a spill is reportable, the Canadian Supreme Court advises that “when in doubt, report” to the regulatory agency. Although it’s an administrative headache, the risks, including potential fines and even jail, for failing to report a spill that should have been reported are significantly greater, including bad PR, prosecution, fines and even time in jail. Bottom Line: You should have a spills response plan in place at your company.