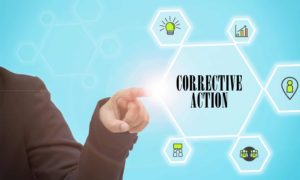 Fixing a problem after an accident occurs may expose you to second guessing.

The silver lining in workplace accidents is that they point out the flaws in your safety measures that you need to correct. But in a perverse way, implementing corrective actions to prevent accidents from recurring can lead to second guessing. Why didn’t you implement those measures before the accident happened, investigators, prosecutors and companies suing you for damages might ask. As a matter of general policy, “remedial measures” can’t be used as evidence of guilt for violations that occurred before they were taken because the law wants employers to learn from their mistakes and improve their OHS programs. However, there are exceptions. Here are 2 cases illustrating  the rules governing whether post-accident remedial measures can be used against an employer.

A meat plant production line worker reaches into a nitrogen tunnel to remove frozen hamburger patties stuck to the sides. Her engagement ring snags on the conveyor belt, ensnaring her hand and inflicting injuries that cost her 2 fingers. In response to the accident, the plant makes improvements to the production line to prevent similar accidents. The prosecutor charges the plant with improper supervision and asks the court to let it present evidence of the subsequent improvements to the production line to demonstrate the plant’s guilt.

The court said that the post-accident improvements to the production line couldn’t be used as evidence of the plant’s guilt or innocence, citing language from an 1869 English case stating that “people do not furnish evidence against themselves simply by adopting a new plan in order to prevent the recurrence of an accident.” Letting the prosecution use post-accident improvements as evidence of guilt “would be barbarous,” it said. It would be the same thing as saying that “because the world gets wiser as it gets older, therefore it was foolish before.”

The Ontario Superior Court orders the company to turn over the information.

The company argued that remedial measures taken after an accident shouldn’t be allowed as evidence against a company because it may discourage companies from taking remedial measures. However, the court didn’t buy that theory, saying it’s “a fallacious argument.” The court thought it was unlikely that a company would do nothing—and risk further accidents—simply out of fear that doing something might be used against it later.  So, the ship owner had a right to get access to any changes the company made to its fire safety practices and procedures after the accident.