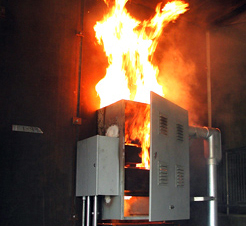 Two workers for a utility contractor were instructed by their supervisor to enter an electrical vault to begin preparing termination of conductors that had been pulled into the vault, which contained various energized electrical equipment. The handle on one of the switch gears was in an open position with a blue tag attached, indicating that there was work being conducted on the unit. Neither worker was aware that the switch gear was energized. So they didn’t wear rubber gloves or use barriers. As they began work, there was an arc flash within the switch gear unit and both workers were seriously burned. The contractor pleaded guilty to a LOTO violation. The court fined it $80,000 [Powerline Plus Ltd., Govt. News Release, Sept. 15, 2015].