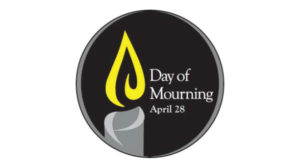 Each year on April 28—the International Day of Mourning or Workers’ Memorial Day—organizations and individuals remember those who’ve lost their lives in work-related incidents or to occupational disease.

Despite changes in the OHS laws, improvements in technology and PPE, and other developments and updates that should make workplaces safer, workers continue to die in Canada in significant numbers.

For example, in BC alone, 122 workers died in 2015. According to the Association of Workers’ Compensation Boards of Canada, in 2014, 919 workplace deaths were recorded in Canada—more than 2.5 deaths every day.

And in just the last month or so, workers across Canada died in these incidents:

Go to the Threads of Life website to read about what Day of Mourning means to families affected by workplace fatalities, life-altering injuries and occupational disease.

The Day of Mourning is also a good time to re–new your commitment to creating safe workplaces. So do something to honour those employees who’ve been injured or killed on the job and stress the importance of workplace safety in general.

ONE IS TOO MANY