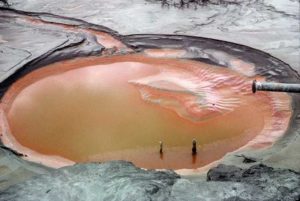 About 670 million litres of wastewater spilled out of a broken earth berm at a coal tailings pond at the Obed Mountain mine. The Alberta Energy Regulator said material in the spill included minerals, bits of coal and a substance used in coal production. In the weeks after the spill, the province advised downstream communities not to draw water from the river and farmers not to let livestock drink from it. Two tributaries of the Athabasca River were affected. The subsidiary that operated the mine and its parent company were charged with six violations of Alberta’s Environmental Protection Act, Public Lands Act and Water Act [Coal Valley Resources Inc. and Sherritt International Corp., Oct. 19, 2015].