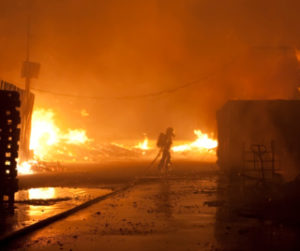 Two recent factory fires serve as tragic reminders of what can happen when workplaces and workers aren’t properly prepared for emergencies, such as fires.

At least 110 garment factory workers died and about 200 others were injured in a fire on Nov. 24, 2012 near Dhaka, Bangladesh. The building lacked fire exits and some of the victims died after jumping from the burning structure.

A fire official said the death toll would have been much lower had there been even one functioning emergency exit to prevent workers from becoming trapped inside. It didn’t help that the main doors may have been padlocked shut.

One worker who suffered minor injuries after jumping from a second-floor window said workers were told to go back to work after a fire alarm sounded. Another worker told reporters that fire extinguishers in the building didn’t work.

A few days later, on Nov. 26, 14 people died and at least six were injured after a fire broke out at a workshop for disabled people in southwestern Germany. The cause of the fire hadn’t been determined yet.

The workshop employs around 120 people with either mental or physical disabilities in a variety of jobs, including metalwork, woodwork and electrical installation.

Here are four fire safety lessons we can all learn from these tragedies: